The (not) surprisingly robust IBM i marketplace

I’ll cut to the chase: IBM i is alive, well, and still kicking butt after all these years, according to a recent, comprehensive marketplace report by IT management software developer HelpSystems in conjunction with IT Jungle and PowerWire.eu.

This report includes the results of surveys conducted with 350 IBM i companies ranging in size from a few hundred employees to over five thousand, using 6.1 and 7.1 operating systems and one to five Power Servers – Power7 being the most popular, followed by Power5. This broad range of users and systems lends even more credence to the staying power of the popular enterprise platform.

Some of the survey statistics reveal that 62 percent of survey participants run multiple IBM I partitions, almost 50 percent have not yet implemented a high availability solution to better accommodate a mobile workforce and 70 percent are utilizing web servers running on IBM i.

Topping the list of IBM i users’ concerns is fundamental application modernization that includes app development and improved change management – things that go far beyond just a new graphical interface, revealing a commitment to the platform and an interest in ensuring long-term performance.

Following modernization as a top concern is high availability as mobile workforces grow and companies doing business internationally need to provide easier access from anywhere, anytime. Of the approximately 30 percent of companies implementing a mobile computing strategy, almost 20 percent are planning around iOS and almost 10 percent for Android.

These kinds of IBM i initiatives require in-depth skill sets that can easily exceed the capabilities and capacities of many IT departments that are so often underfunded and understaffed. In fact, the report showed that almost half of the respondents listed IBM skills depletion as their third most critical concern – the supply of workers familiar with IBM i is dwindling. The report suggests “a need to involve younger colleagues in IBM i projects.”

This challenge is compounded by the growing trend to gather, store and analyze more and more data as a cornerstone of CRM and other business-building strategies. This, in turn, results in the need to grow server capacity and general IT infrastructure, further taxing stretched IT resources. Many business consultants are now encouraging SMBs to engage managed services providers (MSPs) to help them stay current with hardware, software and OS levels.

Overall, the survey results indicate a still-rosy future for IBM i. In addition to its popularity due to its high reliability and flexibility, there is simply too much critical business worldwide that runs on IBM i for it to disappear anytime soon. The challenge for enterprise users will be to keep up with upgrades and any expansion that comes with business growth and the need for increased capacity and functionality. If that sounds like your company and you’re not yet using an MSP, it might be time to consider one. 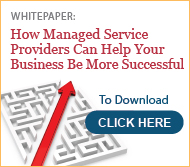