So when IBM research and analysis firm ITG recently updated its Total Cost of Ownership Report, chances are good that a lot of eyebrows were raised. It turns out that IBM i and the servers it runs on not only are still a solid, cost-efficient SMB IT infrastructure solution, they blow the competition out of the water when it comes to TCO. We’re not exaggerating – i Series hardware and software cost an average of almost 56 percent less to own than comparable competitive systems.

ITG considered a comprehensive set of criteria for determining TCO when evaluating the i Series, including:

Here’s how the Power servers stacked up against the competition for total cost of ownership:

What makes these numbers even more compelling is the fact that the average SMB has to deploy three to five competitive servers to match a single Power system and that IBM i powered systems experience up to 79% LESS downtime than the other systems – vital for any organization with mission-critical data management needs, such as companies with a mobile workforce or ebusiness environment.

As if that isn’t enough, the most substantial cost savings realized with IBM i powered systems is in systems management. IBM i simply needs much less administrative support which can result in significant employee overhead savings.

So if you’re under pressure to replace your “old” i Series infrastructure, show the ITG report results to iSeries naysayers and rest easy knowing that the industry’s most reliable and cost-efficient SMB IT infrastructure still is. 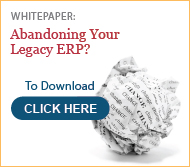